Holiday Wishes 2K4
For anyone who cares, here's my yearly Holiday eCard.

Posted by Nathan at 3:03 PM No comments:

Mostly Other People Do the Partying
But not Wednesday, baby. I'm psyched for the CD release party for Moppa's Mostly Other People Do the Killing album. (Which I designed.) Kate and I will head up to Manhattan after school to live it up like rockstars. And by "live it up like rockstars," I mean "Behave ourselves and get home at a reasonable hour so we can both get up early and teach the next day."

It's what the kids are in to. Get yourself a t-shirt.

Posted by Nathan at 4:18 PM No comments:

Who ya gonna call? Me.
It's been awhile, but once again I ended up going a bit nuts for Halloween. Too much time and too much money were both poured into what may rank as my most kick ass Halloween costume ever. I was a Ghostbuster. The costume was worn three times. Once for a day of school (a "casual dress" day was in effect and fortunately my kids had seen the 20 year old film), once to Al and Mary's party, and once to Kate's house. I probably got the most compliments in South Philly where I was stopped in the street about 10 times in five blocks. The highlight of the getup was obviously the homemade Proton Pack and the moment when I consciously decided to take things too far was standing in I. Goldberg buying an actual, authentic, military issue, tan flight suit. 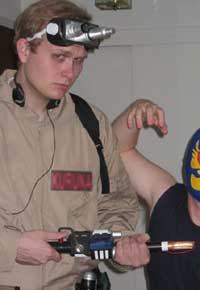 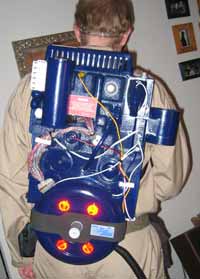 But the moment I knew my hard work had really paid off was getting stopped by a police cruiser walking home from school. I guess I looked like a terrorist. But who can blame them really. I was "walking around with an unlicensed nuclear accelerator strapped to [my] back."
I was a Ghostbuster back in 5th grade. It was decent, and I made the pack then too, but it wasn't nearly this cool. Man, if my 5th grade self could see this costume, I'm pretty sure he'd pee his pants. Here's to reclaiming our youth.

Posted by Nathan at 9:46 PM No comments:

Big Freakin' News
Let it be known, I am now a teacher of Audio/Visual Communications Technology at The Franklin Learning Center High School in Philadelphia. Basically, I'll be teaching intro film making/cinema studies to grades 9-12. Man, am I excited. I think it will be incredibly fun, interesting, challenging, and rewarding. I've been in to see my classroom, meet my admins, and learn about my school and it all looks great. Wish me luck.

By the Way...
The wait is over and a new cultural phenomenon is upon us.
This was a weird little side project, suggested by a friend of mine. I bring peoples' ideas to life. You know you (or your girlfriend) want(s) one.
Spread the word. Who doesn't love ninjas?

Posted by Nathan at 5:27 PM No comments:

More Moppa
More work/thought on Moppa Elliott's site. And he also got me on board to design the cd for one of his bands, Mostly Other People Do the Killing. It should be released by the end of the summer. Rock on.

Posted by Nathan at 2:22 PM No comments:

Rock Star
I designed an album recently for a little band called GHOST LiGHT.
For those of you not familiar with Ghost Light, we're a satirical rock band/performance art thing formed at PGSA 2003. It started as a one time performance, then got way out of hand. And by "way out of hand" I mean "awesome."
The album art is pretty sharp if I do say so myself and is based largely on the photos of Megan Kobus and Austin Davidheiser. It's actually not an audio CD, it's a VCD of our concert at PGSA last summer, so if you want to check out rarely seen "extrovert Nathan" pick it up. It's pretty hilarious and will run in most DVD players.

Homecoming
Well, I'm back at The Governor's School to getting people's feedback on the video piece. Responce has been great. I think it's almost there. I'll also be shooting some pickups, working in new faculty, etc. Good times. I love this place.

Demolition Derby
Filming has begun on what I've been calling "The Car Kill Project" now with a working title of "Goodbye, Ada." Basically it's a short film about Grooters killing his car. The Plot is as follows: Ben knows that his car is old and infirm and has no chance of passing inspection. So, he decides (with some coaxing from me) that the only humane thing to do is to put it down, Old Yeller style. So he drives out to the country and starts digging a hole. But the car gets wind of what's going on and isn't having it. Ada tries to kill him and after that it's on. A battle royale to the death. We made plans on Saturday and started shooting in the city on Sunday. Then we took the car out to the farm for the country portion. Hopefully we'll resume shooting in early June. The city shoot went well. Call time 8am, he drove around, I got all our shots, and cute girls asked me what I was doing. An excellent day.
The reason for making this film is simple. Grooters' car really is old and infirm and won't pass inspection again.
Now, it'll be going to that peaceful used car lot in the sky.
Right after a prolonged, gruesome, and violent death.

Hot Stuff Baby Tonight
What have I been up to? Here's a hint: http://nathankuruna.com/salsa/
People been askin', so there they are!

More News You Can't Really Use
New projects in the pipeline. Well not really new, just unpostedabout.
Working on a simple website for Moppa . It's comin' along.
Also, doing lots of work with Geof on AnybodyButBush2004.com because, like over 50% of the US population, I'm really not interested in another four years of George W. Bush. (Actually, I've been on this project since about September, but due to the possibility of alienating potential employers, I though it best to leave it off my site until now.)
I went to the DC Independent Film Fest Wednesday night w/Kate. Got to see "Going Home" on the big screen, which was nice. Didn't get to see a whole lot else though, because they were running behind schedule and I had to work the next day. :(
But still, I was happy to have gone. And I got a free t-shirt out of it.

Hiya. So this isn't really work related. (Or is it?) But the following link should prove useful to anyone who listens to music:

So check it out!

Perks of the job 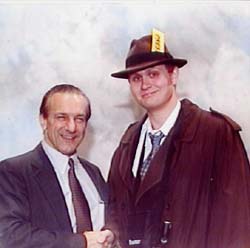 So I did a corporate event tonight. Weird. I and about 5ive other people were dressed up as pappararzi/1950s news hounds, for the Cendant Mortgage "Night at the Oscars" gala thingie. Weird. I ended up following a Joan Rivers impersonator around with my camera filming her harassing random people during cocktails. Weird. But at least I got to have my picture taken with (a) Robert Dinero (impersonator.) He's a swell guy. I also got a free pen.
Comment
Posted by Nathan at 12:30 AM No comments:

Animation Ahoy!
So, check out this animation
"Dancin' Bush" will be going into use on Anybody But Bush 2004.com in the near future whoo!

"Going Home" hits the DCIFF
"Dear DCIFF 2004 Festival Finalists:
Congratulations on being selected for the 2004 DC Independent Film Festival. ... You will be notified officially soon, including an official letter, contacted by our press department who will work with you to promote your film and the DCIFM (film market) who will be contact distributors directly about your film.
We thank you for your patience and again congratulate you for making films that make people dream.
Thank you again.
Your fans at DCIFF
Carol Bidault
Executive Director/Founder
DC Independent Film Festival (DCIFF)"

Posted by Nathan at 7:33 AM No comments:

New project!
So I talked to Larz the other day and he wants me to do a short video for his Larz Hall Jazz Orchestra. I'll be going to a studio session this week and to a gig at Chris' on the 29th. This along with a few interviews will be edited down to a short 2-3 min piece to be included with the promo materials he's working on. Should be awesome. Maybe I'll try to take some still photos too. We'll see. But I'm psyched.

FYI, if you go to http://p-g-s-a.org, you can peep the site I made for the Governor's School. I've got a better one in my head already, but it'll do for now. You can see, among other things, a two minute version of the promo video and some clips from theatre pieces and also hear mp3s etc. Good times.

Happy New Year?
So again, I should have posted this a long time ago, like right after Thanksgiving, but I got a job.
I'm doing editing and soon shooting and also DVD authoring (and misc. equipment stuff) for a place called The Entertainment Source. Its based out of Jenkintown. Their primary objective is to provide music (bands) and "entertainment" and sort of party facilitation services for corporate and social events. They've also added videography to the list of services they provide and that's where I (and some other guys) come in. I was turned on to these folks by my friend Kristen from Drexel. She worked there but now she's going to look at grad schools and they had to fill the gap. And they did. With me.
Anyway, it's nice to be working with friendly people for a steady paycheck again. We'll see how it goes.

The animation for Greenworks (soon to be Greentreks) seems to be on the back burner. I say this because they haven't gotten back to me about the Pilot I gave them. But I'm sure they have a lot on their collective plates and will contact me when appropriate. *shrug*